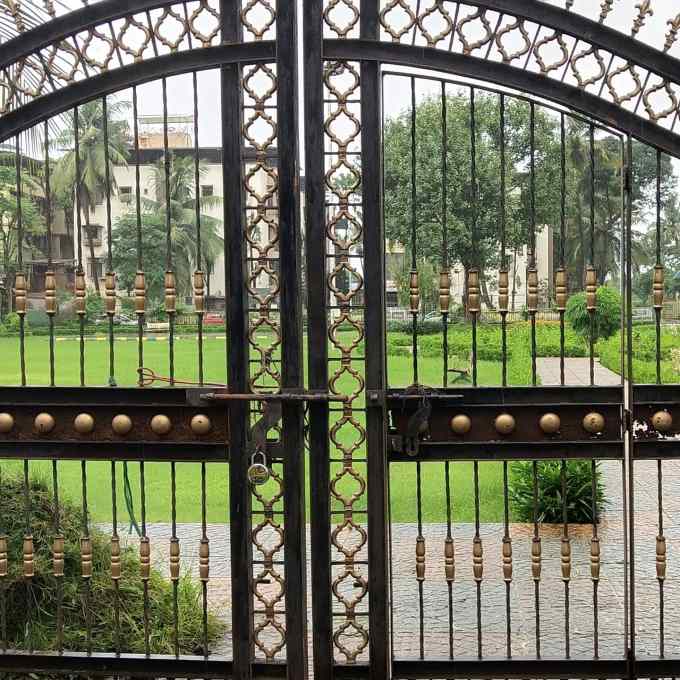 The gates to fun stand in rust, chipping away from the inside.

They now guard mere mementos that once amplified the voices of frolicking children from a seeming age gone by.

The trauma being nervous with despair about a distant tomorrow, with a wasted age of innocence waiting to fade like contrail.

“Why, oh why did those little feet that crossed my nonchalant gates to flutter in my garden, cease? What insurmountable fear were they fed that clipped their wings? Tell me now and tell me true, do they all still fly? I don’t know how, but I hope they do. I hope they do.”

The swing hasn’t felt the rush of wind cut through its icy chains in a long while. Stillness of time has made it too torpid to know if it’ll just creak, or will it break on flight. 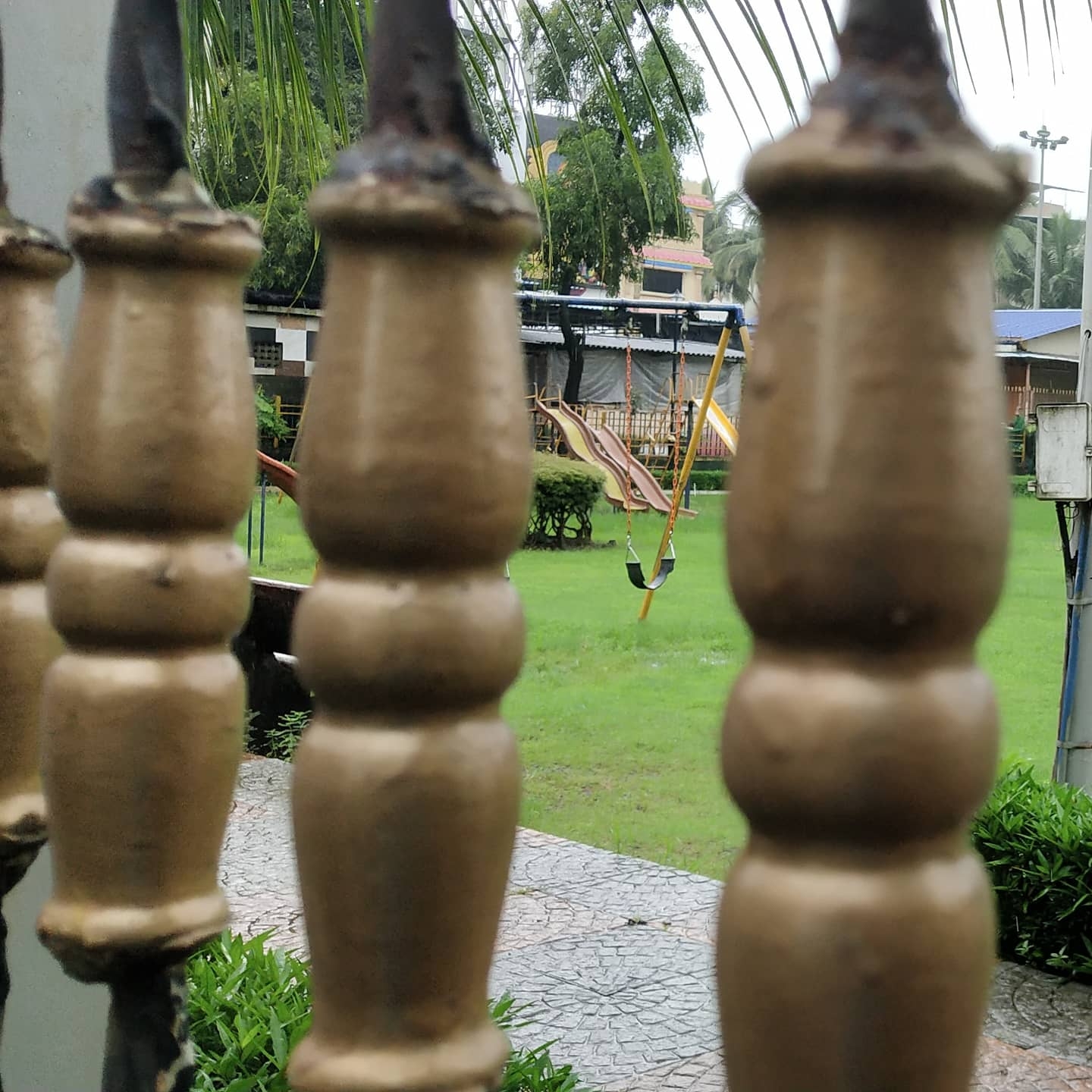 The slides wait for dew and rain to run down on its slippery slopes just for the sake of sanity. Yet, they sound hollow without a puddle formed out of depression by the landing of tiny feet. 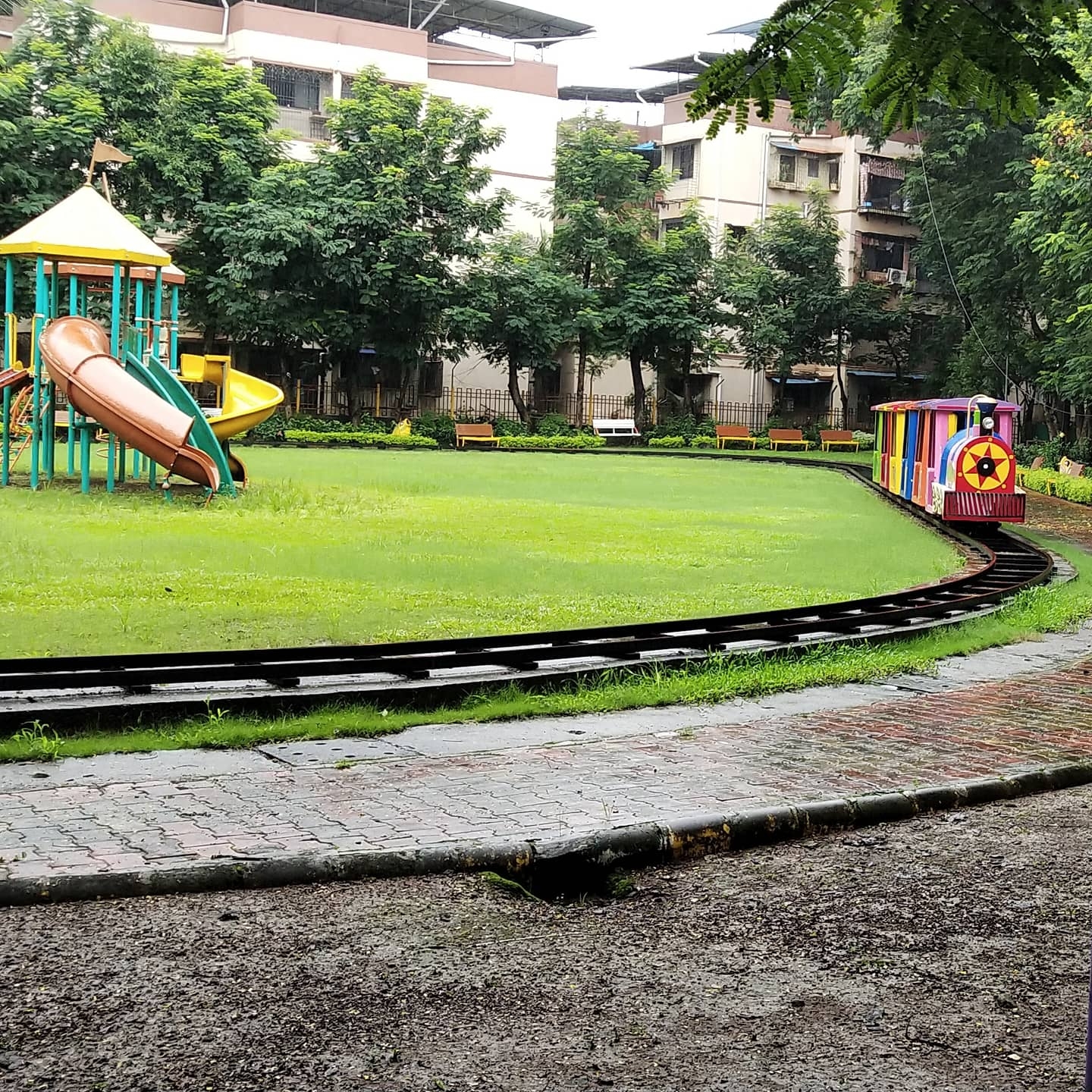 The ruins of the ball court is enhanced by surrounding weed. And the loop has already succumbed to loneliness, despite the attention. 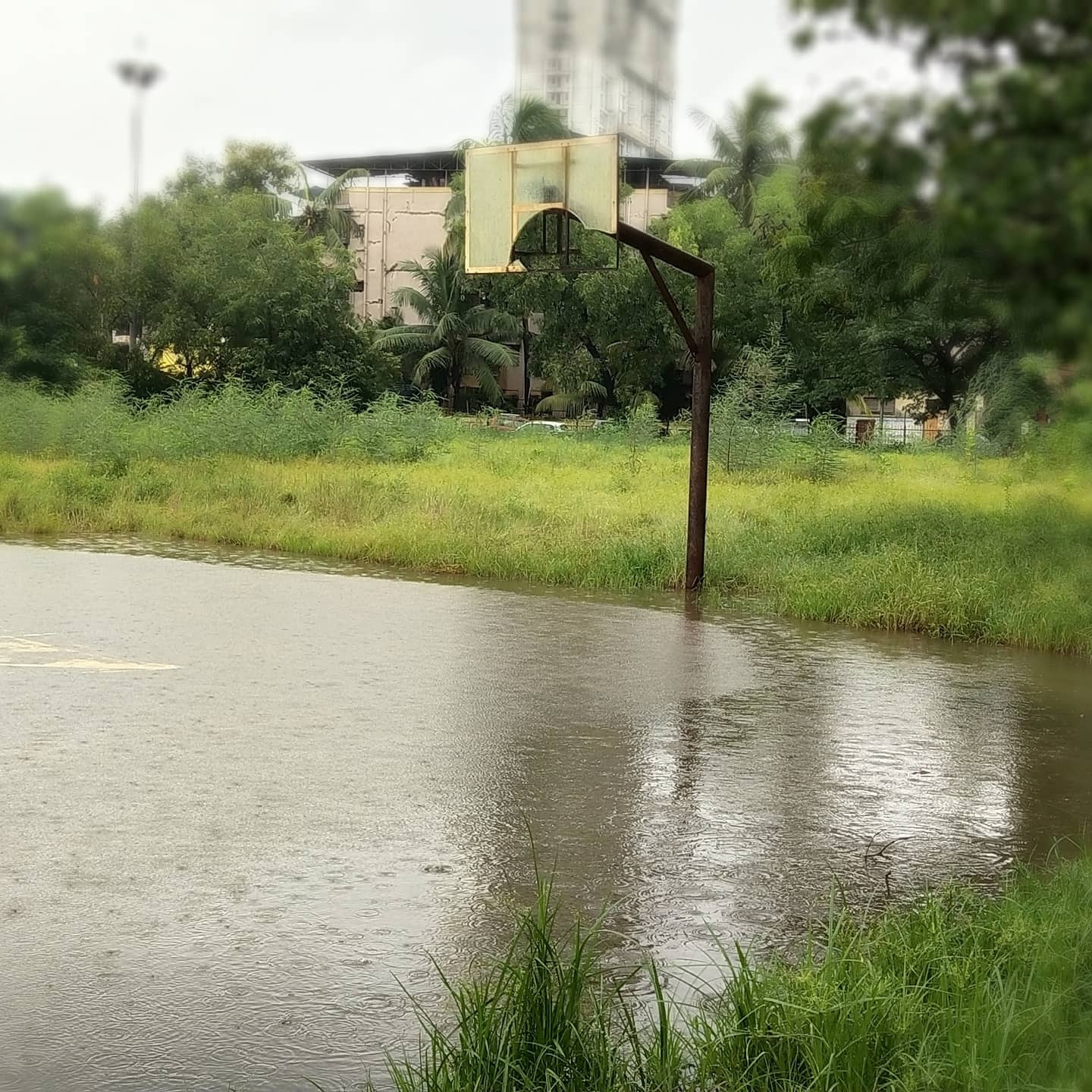 The silent whimper of the locked gates gets further drowned by the indifference of the crowd. Yet its cheered on somewhere by the memory stills of yesterday, which envision a much better tomorrow than today. 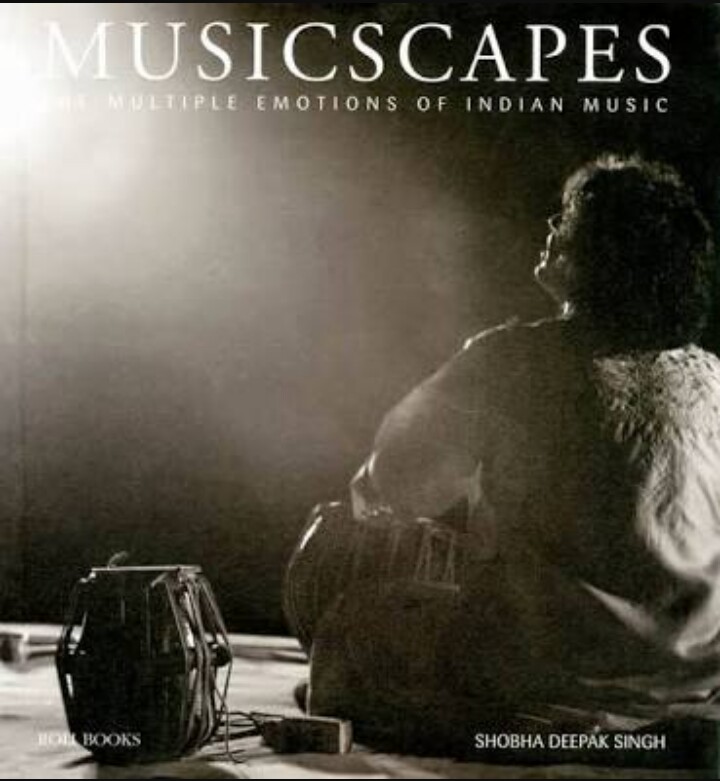 For hardcore Tambrams, just like yours truly here, there are little joys in life which are as pure and nirvanic as sitting by the window, enjoying a freshly brewed piping hot cup of filter kaapi. The experience transcends further, when it’s accompanied by the sound of a downpour and a book in hand. Coffee in the house was already as free flowing as the swollen Mithi river from this incessant Mumbai rain. So to complete this ensemble, I had Padmashri Shobha Deepak Singh’s latest coffee-table book named ‘Musicscapes – The Multiple Emotions of Indian Music’.

With this, she completes her ‘Scapes’ trilogy on Indian fine arts, following her ‘Dancescapes’ and ‘Theatrescapes’. While her previous renditions were a collection of her freezes honouring our dance forms and ‘navarasas’ (9 forms of expressions) respectively, ‘Musicscapes’ is a tedious collection of over 200 photos of great names from Hindustani classical music. These were meticulously curated by Dr Alka Pande from lakhs of images captured through Shobha’s curious and tasteful viewfinders spanning nearly five decades.

Being in black and white, the pictures have a dream like feel and charm to them, with no descriptions to limit or distract their work on your imagination. Although, references are available at the end of the book in the form of names of the legends in their candid moments, yet not with the dates or period of the events just like her other two ‘Scapes’.

The book is full of majestic images of the legends of Hindustani classical music, some gesticulating in trance, while some animated, wrestling the high notes to stay in tune with the Tanpura.

The journey of imagination with a book like this is a personal one. And for me it was like those good old days, when me and my brother excitedly went through All India Radio’s yearly brochure on Akashwani Sangeet Sammelan – a catalogue with photos of the artistes to be aired on radio for that year. Being exponents of the Carnatic form of Indian classical music, we both were equally curious to know the Hindustani legends lined up that year as much as the Carnatic ones.

So my imagination stutters for a brief moment there, in realisation that this book had no southern representatives apart from the Ghatam great Shri Vikku Vinayakaram, who is captured in jugalbandi with the mesmerisingly photogenic Zakir Hussain.

So I assume that it would’ve been apt to tag the book ‘The Multiple Emotions of Hindustani Music’ instead, since Shobha Singh serves as the director of Delhi’s Shriram Bharatiya Kala Kendra. It is reputed for its courses and trainings in Hindustani classical art forms and was also the stage where the pictures of the celebrated virtuosos were clicked and documented by the author for her massive library.

Going by coffee-table book standards, this one is for keeps with the never ending conversations it’ll initiate with unbiased lovers of Indian classical music. In all, the complete trilogy of ‘Scapes’ by Shobha Deepak Singh, who is as passionate about her art of intuitive photography as she is with promoting and preserving our fine arts, is definitely a tremendous achievement. 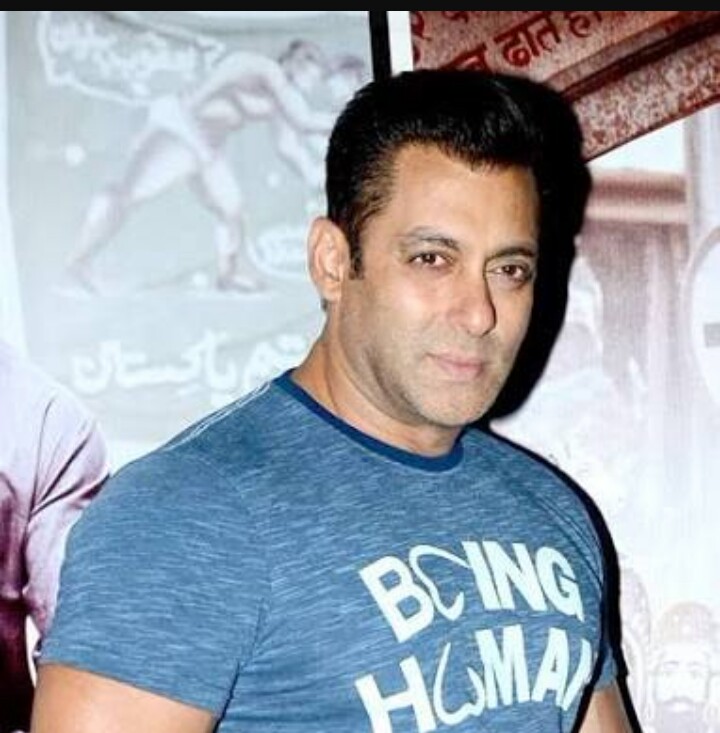 I remember twitching uncontrollably in my pretty comfortable chair reading Salman Khan’s cringe worthy analogy of comparing his enduring film shoot to that of a heinous sexual assault on a woman. He was embarrassingly callous to associate his feeling of extreme physical exhaustion from shooting a wrestling scene to that of  a ‘raped woman’. Now there can be no speculation on whether it was really Salman who said it and is that what he really said. Why? Because Mr Salim Khan has already offered an apology on his son’s behalf as is the norm, and wants us to remember, yet again, that Being Human is to err. Or something like that.

Anyway, I don’t think Salman will be apologising, much to the relief of the All India Bhaitard’s Association (AIBA) members. Because Salman was merely being empathetic, which is when you try putting yourself in somebody else’s situation. Salman thought a sexual assault on a woman is just an impromptu wrestling between her and a hog. Pretty straightforward right? Ok, this is were the Bhaitards clap.

In fact he’s so empathetic, that he has a list of alternate analogies to remark his drilling shoot – “felt like an SUV ran over me”, “felt like a Black buck running away from it’s predators in the hot desert”, “felt like someone who received 41 calls in a night”, “felt like my song got deleted after I recorded”.

Amidst all the flak I read that he has attracted for this wisdom he shared, I also read some counter arguments in Twitter from some AIBA members suggesting that other people are not incriminated when they use the ‘raped’ remark to address plundering defeats, especially in sport. Now that is just an alternate usage of the term sans any generalisation, maybe a crass substitute to highlight the helplessness of sporting teams in a one sided contest.

If Salman would’ve been just a wee bit more thoughtful or maybe a little less stupid rather by not being specific in his description – “I raped myself shooting the fight scenes for Sultan”, maybe that, still in its poor taste, would not have been as maligning as he imagining himself as a woman coming through that ordeal.

It’s an undeniable fact that there are few words more powerful and haunting as the word ‘rape’. Yet it’s not just a problem of the fairer sex, it’s a problem for the society in its entirety. It is a collective responsibility lying with every individual. Not that we can expect this level of understanding or maturity from our self indulgent Hindi movie industry, which is adamant in recognising itself only as Bollywood. And definitely not from the ‘Sultan of Bollywood’ himself, as will be coined.

His distasteful attempt at empathy was only for the lack of sympathy and his inability to differentiate between them. He proves this by standing by what he blurted and making his father eat the sorry pill instead. Which makes it an error resulting out of complete stupidity, right? Not exactly. As this brilliant level of stupidity gives him reason enough to keep his next release away from any humdrum. The more there’s talk about boycotting his movie, the more excitement it generates. Bhaijaan has rolled the dice and the bhaitards are all dolled up to scoop it all.